Bread & the Buddha Belly: Strolling Through the Bardoughs 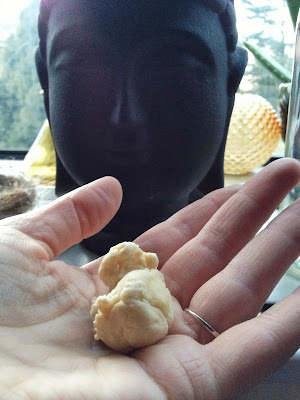 Buddhists will be familiar with the term bardo, referring to a transitional state of existence between two human births.
This recipe tweaks the bardough to capture the mouth-feel of a critical transformational state somewhere along the spiritual path--one where you're not cooked yet.
One that's a stretch-turn-knead-pull pain in the bowl, but holds the liberating potential to rise.

The fun fact is that there are 6 geeky-technical bardo states I've got scrawled on recipe cards from which I cull--but the common flavor of all is this transformative space between the mind (and mindstream) and the body, where all kinds of lovely, terrifying, & burnishing phenomena occur.
It's a little unnerving; after all: it's between forms. Transform = across form.

Oh yes, I've been in the bardoughs, my friends--I'm there as we speak, reporting to you live. 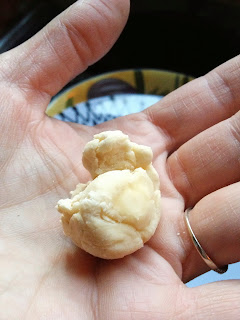 Here, I'm using the term to get at the place in myself in which I know lies the most potential, excitement, and fear: the suspension of rational and physical thought which can only happen for me when I'm not tied to my physical self.
I've experienced this in serious illness or other liminal states (it's not lost on me that I teach students to limn poetry), such as those brought on by chanting or yoga, that get me out of my head. These bardough states are times of both terror and opportunity--but they are also sweetly yeasty with the potential to rise through these frightening, previously unseen phenomena.
When you're in this kind of state, everything is changing (yes, even more than usual)--you see that you're part of a wondrous elastic process, creating something new, but...bardoh!--you also see that you won't be able to undo it, even if you non-try.


Sometimes, it feels light and elastic, if proportionally challenged (like a Stretch Armstrong doll); sometimes it feels heavy (but in a good way, like an x-ray blanket) and plain white-bread-uncertain.

Mostly, I'm writing this (as I always do) because I want you to see what it looks like when you're not a Tibetan monk, just a regular householder trying to bake it till you make it, with cats and small children and all sorts of timers going off, and cast iron pots and a dogged insistence on forgoing potholders which you really must let go of some day; with, frankly, even darling hipster husbands cycling in and out of the sweetly postage stamp-sized farmhouse kitchen, often wanting more of you than it feels like you can ever possibly bake at a time.

I want you to hear that on my particular path there are unspoken and unseen dishtowels I sometimes wish were actually there to throw in when it gets really frightening and challenging, but do not.
Not because I'm especially tenacious or noble, but because you can't unwring the bell--or the dishtowel.

Transmogrified above the peacefoodlove kitchen, what you can see, looking down through the beams and plaster-dust motes, is some kind of whizzing psychedelic synaptic ping-pong, but with dough balls. 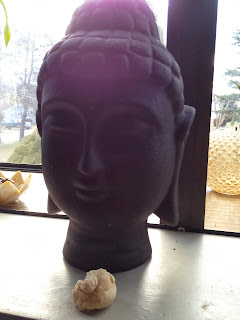 Whether it's a fresh match or batch, be sure that the next day (and every day and every moment that is not Now) you will find odd little balls of air-dried dough that missed an oven of opportunity, now gone cold.
But you can't just take pieces of past dough and try to reincorporate them into some fresh batch of Now, as much as you might want to.

I know, dammit. Sorry to punch your ego down, but rest assured, mine is right there with yours in this bowl.
Even a day-old dough scrap won't re-combine: it's un-work-a-ble.
(Chin up, cosmic bakers! I'm pretty sure even Pema Chodron couldn't work with it). 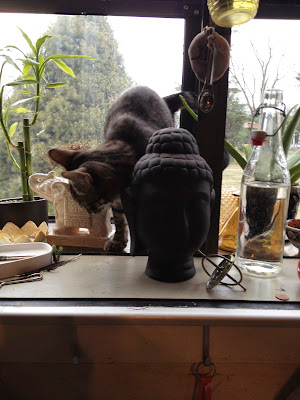 Like I said, the moment you try to stick that particular form in the shrine and contemplate it, your stealth and supple cat (his name is actually Sid, and the kids & I have taken to calling him "Siddhi Super Powers") will leap up and thwap! your attempts to preserve it right off the ledge and knock it out of sight--yep, right into the bardoughs.

And when forces seen and unseen are batting your bardough around, (insert feline paw-thwap! sound now) it can scare the doughscrap out of you.

(If it makes you feel any better, Ram Dass would tell you that dough ball had no place to go and nothing to do, anyway.)

My point is: the past-kneaded and past-needed moment? (which is not the same as a tradition or a method, though a method can become stale)--can never be humanly combined with the freshness of Now.
The seams will always show and break apart, like monkey bread (interestingly, Hanuman bread doesn't do this--recipe coming this summer).
Always.
In trying to scrap together the past reality of stale forms and models with the present moment, we break apart.

Perhaps we have to have our best crimping, pinching efforts, our most valiant finger-dipped-in-warm-water seamings be broken apart, over and over, to see.
Our sleek and wise cats with super powers pointing with their tails to the real knowledge, which isn't in cookbooks--the kind you finally know and stop self-consciously considering whether or not you know.
There is really only this moment.
This moment is "k as in kneaded," um (K)NOW.

Now.
If you believe that in the end, the love you bake really is equal to the love you make--and I DO--then you just have to take the uncertainty of it this idea I'm handing you, still warm in my own brain pan, and doughroll forward.

It's okay to do this, and you must, because what are you gonna do, anyway?--Bardough doesn't keep. In and of itself, the form is of no use, and it all changes anyway.
Which leads us right back to Now, with its soft, endlessly pliable and uncooked state between past and future forms: the real and only bardough.

So you can only do the best you can with the dough you've got in the pan where you are, to transform the predicament of the single moment in which you find yourself, using models and forms--like a bread pan.
Sometimes, as in this case, they make things easier (like creating a uniform surface for your rhubarb preserves and firm cutting edge for your clarity-sharp knife). 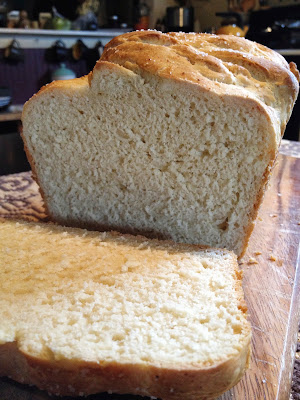 I have faith in my methods--mettaphor, wordplay--and I realize it's all just more practice, more cooking time, more time for a stroll.
It occurs to me that I hardly ever hear that term anymore, stroll. And I think, if you're with me, we might bring it back into fashion:
standing+roll = stroll.
Is there a more grounded and noble, once-around-the-back-field-before-dinner posture for a kitchen warrior to practice than a stroll?
Posted by Stacia Trask / peacefoodlove at 2:03 PM