Tao Te Spring: When the Student Is Ready, the Rhubarb Will Appear


Rhubarb is the great ahso.
If it were a mantra, it might be: "And this, too"--surely, one of the most useful of all mantras. 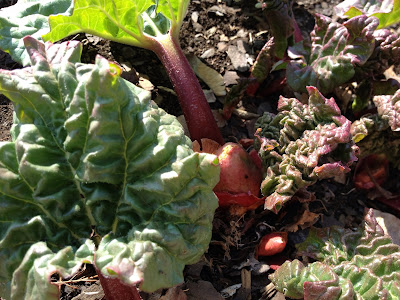 The first real Spring day & one's rhubarb plant arising embodies the Tao of all things, including all our models.
Models for:
taste (is it sweet, sour, or bitter?),
beauty (is it a glorious bouquet or just technicolor celery?),
safety & ingestion (hmmm...you say you want me to eat the stalk, but you're telling me the leaves are poisonous? [ps: who knew where to stop when she discovered rhubarb?]),
not to mention,
simple classification (well, is it a fruit or a vegetable, or what???).

Ahso, it's all these things. And more.

I cannot get enough rhubarb; however, my grandmother Viola (who smiled her small smile of acceptance, saying "ahso" quite often in the original peacefoodlove kitchen) helped condition me towards the taste, which feels like coming to home to the deepest hollow of my crimson heart, and to safety.
It feels like Love.
And all contemplative cooks--especially the umammys out there--know that really, there are no other tastes but these (despite the different names and flavors): that we are all equally open-mouthed and open-hearted, tongues out, vulnerable to poisonous leaves but willing to try, searching for the One.

For me, rhubarb's uniquely tart and old-fashioned-sexy. It's got a jarring, cutting pie-edge quality to it that I admire it for. People don't expect you to love it that much and to want to talk about it much less grow it yourself, or to be so honored and excited to practice with it. This elicits a curious response.

Ahso, it's got a real Dharmic quality to it, that way.
Perhaps you've found that your Facebook friends (and even family) don't really see you anymore, in the so-sheer dirt clouds along this same leg of the path, and you know what I mean.

At the same time it's brazen and dangerous in a sequined, sword-swallowing sort of fashion, rhubarb is just plain comely--especially the poisonous leaves (shrug: old, self-destructive conditioning), 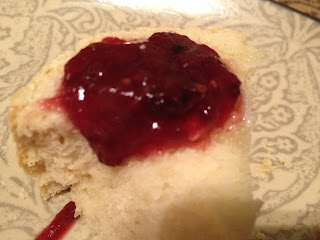 and pleasantly sensible in a pie, or a sweet-biscuit shortcake, or in my favorite incarnation: as a soft rivulet of blackberry-rhubarb jam over the Good Bread, buttered and salted.
At some point in the near future, I promise I will share that recipe with you--but it's not...ready.
Rough-chop and throw in all your models about being ready in the ahsobriquet, too, while we're at it!
When the student is ready, the rhubarb will appear...especially if said student ("Oh, me, me, ME!!!") needs to sit with the discomfort of never, ever being anything close something called "ready"--especially in Spring.

Ready for the path I'm on, ready for all the digging and tilling and planting ad justplainweeding which must be done, ready for the next scarlet step, my foliage unfurling. Ready to work with it all, as it comes up.
Maybe there is only "ready enough."
I like "ready enough" because it smacks--tart-sweet rhubarb-esquely--of the Middle Way, doesn't it? Gardening note: You can plant your own rhubarb, but you'll have to wait a few years to harvest it. This isn't the same as it being ready.


Once it takes, then it's something you'll find you have a lot of without having to ask; you won't have to be "ready" (ask yourself: are you ready for the sun or to breathe), it'll grow seemingly--but just seemingly--wild in your own back yard.

As it grows, you'll learn to respect, to work with, and to make use of it.
Ahso, there aren't very many questions as interesting to me as "Now how do I work with that?," and the motherlodestone of all questions: "Is it useful?"
And that's a question I know how to work with, because rhubarb is a methods food, and I am a methods maven.
I suppose that in the end, no matter what you do, you're only a garden bed: you ready yourself by non-doing and by doing. You're as good as your soil and your right effort, and also this: you're as good as your patience. As good as sitting on your hands--"and these, too"--and just observing it all unfolding.
When I was about twenty, I read these words of one of my heroes, John Dewey, and they forever changed the course of my life--as a teacher, as cook, as a spiritual being on a human path: "Start where the learner is and proceed."
And I am still proceeding, and proseeding, twenty years later--right up to this insight which sprouted about twenty minutes ago:
In a far-out way, and with a deep, rhubarb-red bow to Ram Dass (another of my greatest teachers), maybe before you can learn anything (like what to do with rhubarb), you have to start where you is, and actually Be that which is Here Now. 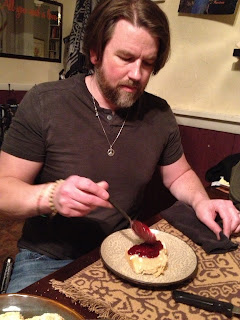 I just realized that I "learned" to work with rhubarb by recalling the taste I'd known easily and often as a child, but was missing as an adult. I have a few memories of my grandmother paring a carrot or an apple, of picking berries with her, but mostly, it's a feeling that guides me. I have the full and open sensation of being completely loved and accepted, of being allowed to try things for myself in her kitchen. Later, when I met my husband (whose own grandmother's love, curiously or not, predisposed him to rhubarb), I found this same taste in my mouth. And "it"--and I--woke up: this need to taste that rhubarb-red love of acceptance, to feel at home in my own heart. So, that's how I cook: like I'm trying to get back there. Several thousand times a day, coming back to where I already is.
But recipe-wise (I have a few of hers; they are beautifully written and ingredient-descriptive, with no actual amounts), all I've really got to go on is the smell of love, the ultimate, olfactory construct of memory which has the power to make then, Now. You might say then, that love can transform time without actually doing anything. 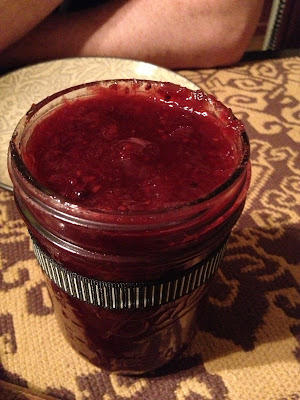 It's pretty simple: I "learned" to make the beloved jam by making the beloved jam (and the Good Bread)--and by watching the look on my beloved's face when he eats it: my heart, reflected.

My husband is a very tolerant and wise man, who never questions unabashed Dharma love, or that the rhubarb rising will transform into jam, in time.

Jam is a highly reflective surface:

That's it. That's the shinyred-rhubarb reflection for today--now work with it.