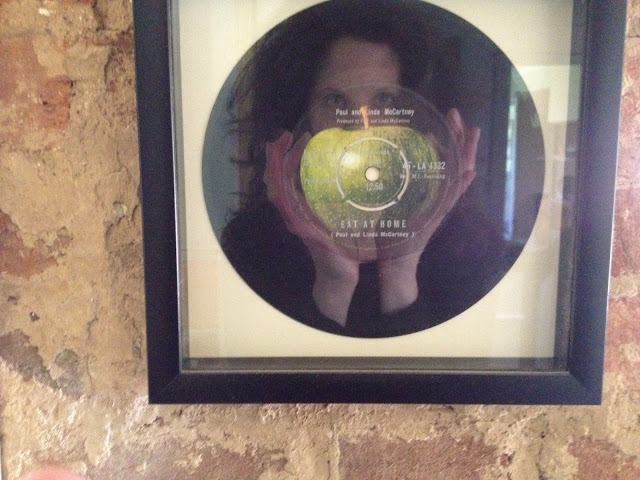 This is a sort of obscure Paul and Linda McCartney 45 called Eat at Home, which hangs in our kitchen.
I had it framed for my husband as a gift when we made this kitchen Ours instead of IMeMine.  Partly because, let's face it, aesthetically it's pretty darn great on that brick chimney. And perfectly fitting to have in your kitchen when your ethos is homemade over store-bought.

But really? I hung it there as an act of faith.

Acts of faith are definitely worth hanging high, and revisiting, and looking at yourself in, from time to time.

I have been thinking a lot about the concept of "Home," mostly because of course I meditate here in this kitchen, and I realized with great pain the other day, taking this picture, that even here, in the undeniable heart of this space, I feel like an outsider.
An interloper to my own feelings, to my own experience of taste--not all the time anymore--but to some degree, and often.

The Buddha tells us that our true home, our true nature and refuge is nowhere else but here, in this body, in this heart.
Yet, I almost never feel at home in my own skin. Never have.
My anxiety, my resistance, my fear, my various ways of coping and numbing to this simple truth of just being has driven me from my true home in my heart for many, many years.
Ladies and gentlemen, I'm cooking my way back.
I guess I am fundamentally...curious. What would it be like to eat at home, within this space, this body this life, this moment, every moment?
To nourish, to relax the iron sphincter in every part of my body, to take in the good?
To simply stop...resisting?

You and I both know, like we know when the milk is sweet or turned, that it's time for me (and for all of us), in this body and this kitchen, in this heart, right now.
But it's actually the beginning, "now," and it's messy and unformed, the way dough sticks to your hands and your bowl-self's sides and you think: oh my gosh, this is just never going to come together.

And still, it does.

As a couple, Eating at Home, over and over, is the daily (sometimes within the micro-fraction of each second) act of faith that if we create a Home, that if we just keep being ourselves, and using our real hands and minds and hearts to mix and cook these real things with love in--very important!--realtime, to be right here and not out there with things which don't feel right for us--things that come isolated in plastic cells in McBoxes--it will be okay.

That if we just keep opening up (sometime I'll tell you about jacking up the joists on the house, hacking out the studs, and literally opening up the walls to this kitchen--even though everybody said, "That's a bearing wall; that can't be done!"), then somehow, it can't help but be be good. That we can be...a real family.

Let me tell you that with 5 kids ranging from Kindergarten to Learner's Permit, three of whom live two hours away (that's 8 hours in the car for a "simple" visit, often in less than 24 hours), with incredibly complex sports schedules and a whole, whole lot of opposition by those enigmatically flummoxing, (utterly human) outside forces called ex-husbands and wives, that we (I, dammit!) cannot control, still with absurd obstacles and enormous amounts of old-new pain, somehow, it has always been pure magic, from the first day we were all here together.

And what did we do that day we all met? We cooked. Right here. We didn't do anything special.
We ate at home.
We were strangers when we rolled out the dough right on this very table--nothing fancy, homemade pigs-in-blankets, I believe (still, what a crazy-intimate thing to do!)--and somehow, by the time we cleaned up the dishes together and pushed the benches back and stood up straight, forever changed, we were a Sangha of Seven.
Shrug. Look, I wouldn't have believed it if I hadn't been there.

That somehow, there was…even room, despite every single constraint of this tiny farmhouse kitchen (with its as-yet undemolished, unopened plaster walls), is a plain miracle.
I don't know we were just so in love we were blindly courageous, or not.

Here's what I think. To have the courage to even start Eating at Home again is some magic.
To even start investigating just what it would take to blowtorch through the steel walls of the heart, and pick the hundred fearful city-locks, and start pulling out all the long rusty nails on the 2x12's, to be willing to kick up all that plaster dust and discomfort, is brave and takes faith.
To turn around and agree that it's even possible to come home is the act of faith.
That faith is the emotional alchemy which is the very key to Home, what the Buddha called "the sure heart's release."

I admit I am fascinated by this picture of myself because it was a moment of release for me, unstaged, an accident. I don't know why I had the urge to take it, but I did not resist.
In this way, it's a picture of an act of faith within an act of faith, which is is so, so lovely a circular magical thing to have happened, not to mention documented, that my mouth is actually sweet inside saying that.
Taking this picture, the way I had to hold the camera, for all practical purposes, I mean come on, that's just lotus mudra, right?
The lotus of the heart, gracefully unfolding. This is what it looks like when it's open, even when it doesn't realize it is.
The organic synthesis of all of that is here is an experiment with nothing less than the absolute magic of that new word: peacefoodlove.
Kitchen Alchemizing dis-ease to ease, and dis-grace to grace.

The thing that can bring us back home, the thing that is "doing" this (better said: "undoing this")? Is mindfulness. Mindfulness is, as the tremendous Tara Bennett-Goleman observes, "seeing ourselves as we genuinely are, not as we seem at first glance as viewed through the filters"--HA! even Instagram filters!--"of our habitual assumptions and emotional patterns."

There are tribes upon clans who have always resisted having photographs taken by earnest and intrepid national geographic explorers, because they were concerned about their souls being captured, their true natures.

Look and tell me that doesn't make sense.

I don't have "time" to be writing this.
My and-children (so much softer and more accurate than "step-children," don't you think?!) are coming, and the house is a disaster and we have a Hunger Games birthday cake to bake, and edible gold fondant glaze to figure out how to make work in Connor's honor, since that was the magic series of books we discovered together, which turned the act of reading from lead to gold for him. Which transformed him into a reader.
That, and I have a twenty page paper to pull off by tomorrow night (so I am now looking at the clock and thinking about eliminating the actual pyrotechnics on the Catching Fire cake) and pheeeewwwwww!...
But the first thing I said to myself this morning, before I even opened my eyes was, "resist nothing."
Including the undeniable urge to look up, resist filters, and to write what I feel.

The last thing my husband said on the way out the kitchen door to the long drive down there for a soccer game/turnaroundcomeback was, "It will be good, you will be good, it will be magic--it always is."

Posted by Stacia Trask / peacefoodlove at 11:54 AM